The first pastor of Sacred Heart Parish was the Reverend W.M. Burke.  Father Burke arrived in Huntington in June 1934.  Under his guidance a commercial garage was converted into a church with assistance of architects and craftsmen. Sacred Heart Parish was dedicated six months later, 23 December 1934,  by Bishop John Swint.  The wall behind the altar was originally red brick with an alcove containing a statue of the Sacred Heart of Jesus, mimicking the front exterior of the church.  A large crucifix hung above the altar nestled between the dark timbers.  There was a pipe organ in the choir loft where the choir would be seated. Statutes on the altar consisted of St. Joseph and the Blessed Virgin Mary.  Saint statues were also located in the back corners of the church.  The curtained confessionals were located to the right at the back of the church.  Prayer candles were located on each side of the front of the church adjacent to the communion rails which were removed when the church was updated.

The flood of 1937 entered the Church.  The men of the Parish worked very hard to save what they could. The statues were carried to the old rectory.  Six of the pews were used as scaffolds to raise the rest into the choir loft.  The women put on dances, festivals, and bake sales to raise the money to restore what had been destroyed.

Where the Sacred Heart statue on the pedestal near Adams Avenue is located, once held a St. Christopher statue.  Once a year parishioners’ cars lined Adams Avenue in the parking lane (now the inside traffic lane) to have their cars blessed by the Priest. 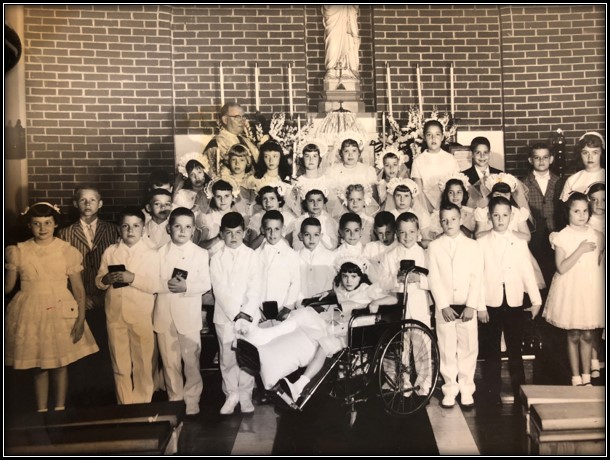 Sacred Heart Grade School was to become a reality.  The ground breaking ceremony was held in March of 1948 under the supervision of Rev. Roy A. Lombard, Associate Pastor. Mr. P.J. Bickar was given the honor of breaking the ground.  The school was nearing completion in the fall of 1948, but not in time for the opening of the school year.  Msgr. Newcomb of St. Joseph Parish offered two classrooms for use until after Christmas when the new school would be ready.  On 31 January 1949, Sacred Heart Grade School was formally dedicated by the Most Reverend J.J. Swint, D.D.

The school consisted of grades 1-8 with one teacher for two grades per classroom.  There was a baseball field behind the church where we today have church parking.  In addition, the parking located to the left of the Parish Hall housed playground equipment.  More playground equipment was in the back of the building where there is now a paved connection between church parking areas.  The cafeteria was located upstairs with indoor basketball hoops and a stage for school performances.

The Pallottine Missionary Sisters staffed the school until it closed in 1978.  The first principal was Sister Theophila assisted by Sister Anita and Rev. Lombard.   The old school building underwent major renovation in 1997 and was dedicated as the parish center and office by Bishop Bernard Schmitt in June 1997.