Skip to content
She is the pillar of the parish – Pallottine Sister remains faithful to her work in WV for four decades. 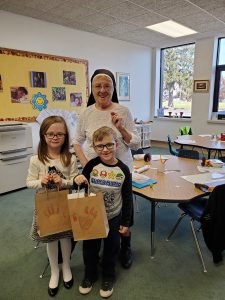 Don’t let her petite stature fool you. She is quite spry and if you blink you may not see her scurry by you at Sacred Heart Parish in Huntington.
“She’s our rock,” Lena Adkins of Sacred Heart said about Sister Mary Terrence Wall. “She has more energy than ten men.”
Her list of “to-dos” is endless, because she adds to them frequently throughout the day.
Tidy from head to toe in her neatly pressed black habit to comfy black dress shoes, she will tackle any job.
She may go to organize the church, but two hours later can be caught on her hands and knees in 98-degree heat yanking weeds along the walkway behind the building, Adkins said.
“I’m just doing what I’m supposed to do,” Sr. Terrence said, adjusting her modest wire rimmed glasses.

She grew up in a strong Catholic family in the Northern Atlantic Maritime Province of Nova Scotia, Canada. Her parents, Rita and Bill Wall had 14 children. Being diligent and hard-working became second nature for Sr. Terrence in her early childhood. At the age of 12 she got her first job after her father passed away. She worked in the kitchen of a local orphanage along-side the cook – Sister Francesca, a Pallottine Sister of the Catholic Apostolates.
Wall loved her time with Sr. Francesca in that kitchen.
“I learned responsibility and selflessness,” she said. “Sr. Francesca was a beautiful spirit. She was a great inspiration too.
“I had no intentions of ever becoming a nun, in fact other than Sr. Francesca, I ran from them and the idea,” she said with a proud chuckle. “But here I am.” 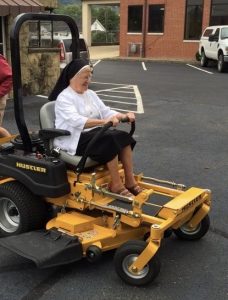 It is evident Sr. Francesca’s dedication is what lights a fire under Sr. Terrence.
She said Sr. Francesca had a nursing degree but accepted her role as a cook at the Little Flower Orphanage as it was the utmost important job she could have.
For the last 40 years, Sr. Terrence, has embraced her assignment, directing religious education for children in preschool through grade 12; and the Rite of Christian Initiation of Adults. But if you ask the parishioners of Sacred Heart, she does much more than that.
“She’s the Energizer Bunny,” Eileen Farren said, noting Wall helps organize the church food collection, toy drive, ministries, and even maintenance.
“The day after this sweet feisty lady retires, we will need a 50 people to do her work,” Adkins said. 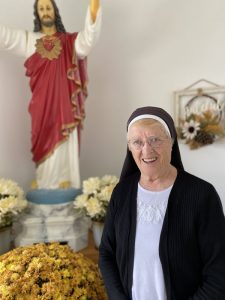 “She is the spirit of Sacred Heart,” Father Doug Ondeck, pastor, added. “She has been the constant here, bridging the gap between priest assignments and being the compassionate care giver needed in our community.”

For more information on the Pallottine sisters in West Virginia email them at provincial@pallottinesac.org or visit the national congregation’s website at pallottinesisters.org.